When you book with an account, you will be able to track your payment status, track the confirmation and you can also rate the tour after you finished the tour.
Sign Up
1931
Info
Itinerary
Bikes
Stay
Faq
Services

A journey through time at the gates of Athens

If you are fascinated by Greek mythology and would like to see famous sites such as Mycenae, Epidauros, and Aegina with your own eyes, then this tour is the perfect choice for you! On this tour, you explore the Peloponnese, the largest peninsular in Greece, as well as a number of islands off the coast. The ‘Island of Pelops’ is home to some of the country’s greatest ancient and medieval sites including the ‘Golden Mycenae’ known from the sagas of the Trojan War.

You will also visit the enchanting city of Nafplio, which was once the capital of Greece, and Epidauros, considered the birthplace of modern medicine, and which has impressed many millions of visitors with the unique acoustics of its huge theatre. And that’s not to mention the islands! The Saronic Islands, located just off the coast of Athens between the mainland and the Peloponnese captivate the imagination with their variety:

From the pistachio island of Aegina with its temple of Aphaia enthroned high above the blue of the sea to the completely traffic-free island of Hydra, where the only means of transport since time immemorial have been the numerous donkeys. Poros too impresses with its picturesque island capital and beautiful sandy beaches.

*For groups of 8 persons and more individual travel dates are possible, please send us your travel date request. 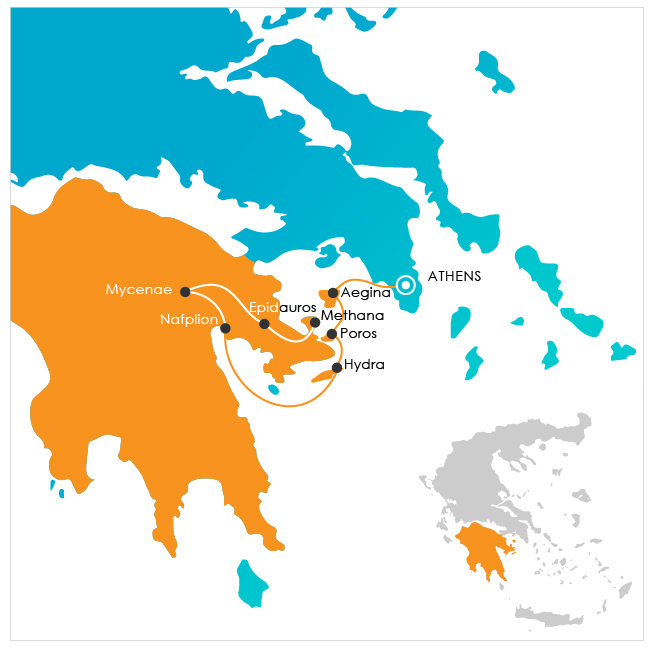 DAY 1
(Sat) Arrival to Athens | Individual arrival to Athens. Airport transfers can be organized on requests. Check in at the centrally located city hotel. Guests and tour guide meet at 7 pm in the hotel lobby for a first briefing. Afterwards we enjoy a welcome dinner in a nearby restaurant with a wonderful view of the Acropolis. Overnight stay in Athens.
DAY 2
(Sun) Athens – Aegina Island (approx. 22 mi./35 km by bike) | After breakfast a transfer takes us to the port of Piraeus, and at 9.30 am, we take the ferry to Aegina Island. The bikes are transferred to the ferry port separately.

Once we have arrived, we start our first tour, cycling up to the sanctuary of the goddess Aphaia. The beautifully preserved temple sits high up above the blue sea, the only place on the island from where the Aegean Sea can be seen in both directions simultaneously.

On the ride back, we take a refreshing swim stop at Agia Marina beach, and shortly after that we stop once more for lunch in a quiet local tavern. After lunch, we cycle inland across the island passing the great monastery of Saint Nektarios to Aegina city where we check in to our hotel.

The afternoon is free to do with as we please, with plenty opportunities for swimming. In the evening, we enjoy a dinner together in Aegina town. Overnight stay on Aegina.

DAY 3
Aegina Island – Poros Island (approx. 14 mi./23 km by bike) | After breakfast we check out of the hotel and take a ferry to Poros Island. Once we have arrived at the island’s capital, which like the island is called Poros, we cycle towards the 18th century Monastery of Zoodochos Pigi.

Afterwards, we continue on, almost completely circling the entire island, which in ancient times was dedicated to the sea god, Poseidon. Shortly before the end of the tour we arrive at Russian Bay, a sandy beach with turquoise blue waters, the perfect place for a relaxing swim!

We enjoy a nice lunch on the beach. Afterwards, we continue to Askeli, where our beach side hotel is located. Enjoy a free afternoon relaxing on the beach. In the evening, we dine together in Askeli. Overnight stay on Poros Island.

Thanks to seafaring, the island became very wealthy in the middle ages. Then, after the Greek War of Independence, spanning from 1821-1830, the island fell into a hundred-year slumber. It was only when, in 1957, the film “Boy on a Dolphin” starring the unforgettable Sofia Loren was filmed on Hydra that life was brought back to the island which then became a mecca for artists such as Leonard Cohen who owned a house on this charming island.

While on Hydra, our guide offers a guided hiking tour along the coast and a sightseeing tour through the beautiful main town. There are also various opportunities for bathing and shopping. The day will fly by! In the afternoon, we return to Poros, where we enjoy a communal dinner and spend a second night in the same hotel.

DAY 5
(Wed) Poros Island – Methana (approx. 17 mi./28 km by bike) – Nafplio – Mycenae | After breakfast we take a ferry from Poros to Galatas on the Peloponnese. From here we cycle through the village of Trizina to the peninsula of Methana. We drop off our bikes at the next day’s hotel before a transfer picks us up and takes us to the iconic city of Nafplio (about 1 hr drive). We enjoy a delicious lunch in the old town.

Afterwards, our tour guide invites us on a stroll through the picturesque alleys of the former Greek capital. Nafplio is a captivating town with its ingenious fortifications and eventful history along with its flower filled old town and the numerous, beautiful shops, cafes, bars, and restaurants.

In the afternoon, we take a transfer to Mycenae (approx. 30 min drive). On arrival we check into the Petit Planet hotel and enjoy a quiet afternoon with a fantastic view of the Argolis plateau. The perfect place to spend a wonderful, relaxed evening, rounded off with a lovely dinner together. Overnight stay in Mycenae.

DAY 6
(Thu) Ancient Mycenae – Ancient Epidauros – Methana Peninsula | After breakfast, we make our way to the magnificent fortress of Mycenae. The site has been a UNESCO World Heritage site since 1999. In the 2nd century BC, Mycenae was one of Greece’s most important cities. King Atreus and his son Agamemnon play a significant role in Greek mythology.

The excavation site is enthralling: The famous Lion Gate, the incredibly thick cyclopean walls, Grave Circles A and B along with the gold and silver discoveries and the Treasury of Atreus are all very much worth a visit. Later on, a transfer takes us to an award-winning olive oil factory.

We take a tour of the factory, which of course includes an olive oil tasting. Our next stop is the ancient site of Epidauros, once the sanctuary of Asclepius, the god of healing. Here we explore the best-preserved ancient theatre in Greece, which has exceptionally good acoustics.

After visiting Epidauros it is only a short drive down to the harbour village of Epidauros, where we enjoy lunch, before the transfer takes us back to the peninsula of Methana.

Here we check in to our hotel. Swimming possibilities and a natural thermal spa are within walking distance. Communal dinner and overnight stay in Methana.

DAY 7
(Fri) Methana Peninsula (approx. 12 mi./20 km by bike) – Athens | Today we explore the southwestern part of the Methana Peninsula by bike. Methana’s volcanic origins are immediately noticeable by the smell of sulphur and the shimmering colours of the rocks.

The peninsula is characterised by its 30 plus volcanos, some of which are still active, as well as its medicinal, sulphurous thermal springs. Today’s round trip offers numerous, incredible views. Our ride ends at a beautiful sandy beach, where we can enjoy a swim in the warm Mediterranean Sea close to Methana town.

After a light lunch in the port of Methana, we take the ferry back to Athens at 1:45 pm. A transfer picks us up at the port of Piraeus and takes us to a hotel in Athens. In the late afternoon, we enjoy a walking tour through the historical centre of Athens.

During our farewell dinner, we look back on a wonderful holiday week with its many unforgettable memories. Overnight stay in Athens.

DAY 8
(Sat) – Departure from Athens | After breakfast check out and individual return home or extended holiday in Greece. Airport transfers can be organized on request. 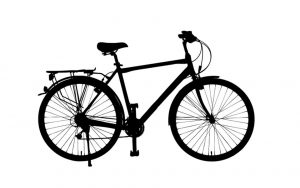 On our tours we use reliable, low maintenance hybrid bikes with aluminium frames of varying sizes. The standard hardware includes 28’’ hollow chamber wheels and high-quality gear and brake systems. 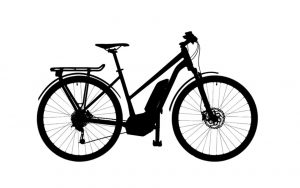 Our e-bikes are high quality pedelecs, mainly with Bosch motors and extra range, characterized by their relatively light weight and great components. They make even the toughest uphill climb fun and are great at spreading smiles on the faces of our guests.

They are all very well-kept and are characterized by a peaceful and welcoming atmosphere, friendly and helpful staff, and delicious cuisine. Of course, all hotels have secure places to keep your bicycles.

Furthermore, all hotels outside Athens either have their own swimming pool or are located in the immediate vicinity of the sea. You will receive a hotel list and further detailed information about your tour before the start your cycling holiday. 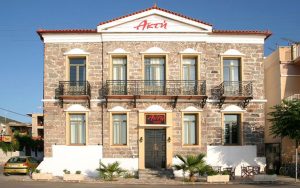 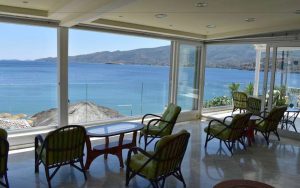 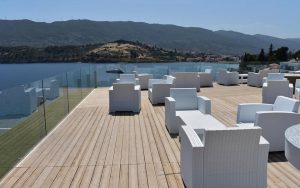 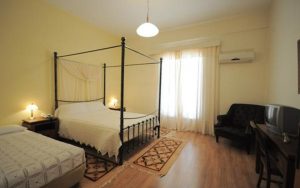 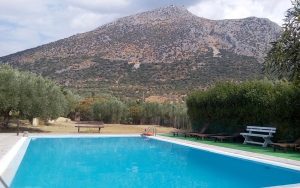 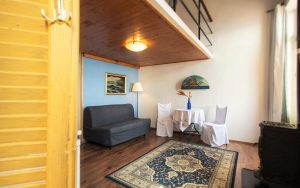 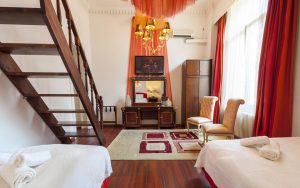 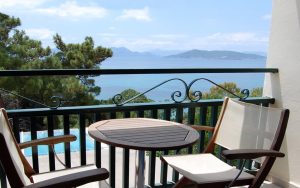 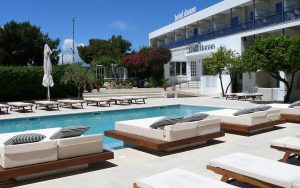 In which language is this tour conducted?
Due to the international audience, this tour is usually conducted in English and German.
Are changes to the itinerary possible?
We reserve the right to make changes to the planned itinerary due to changing weather conditions as well as organizational requirements.
Catering & Beverages
Catering on this the tour includes a daily breakfast in the hotels and 5 lunches and 3 dinners as a group in carefully selected taverns. Please inform us of any food intolerances or allergies before the start of your journey. The same applies if you wish to eat vegetarian. All drinks are at your own expense.
How difficult are the bike tours?
Participants require a fair level of fitness for this tour. The bike routes vary in length between 20 – 35km/12.5 – 22mi. and 400-700 elevation meters per day and lead through hilly to mountainous terrain. There are some longer climbs during which you are of course permitted to push your bike. The roads are mostly asphalted.

Your tour guide informs you each day about the tour details. This tour is primarily a guided group tour. Upon consultation with your tour guides, the possibility to cycle on your own along recommended, suitable routes, may present itself. You are free to set aside a half or full day to swim, instead of taking a planned cycle tour or activity.

Good to know – Group pace during the tours
On our regular cycling tours, the cyclists on regular bicycles determine the pace. We ask guests who have reserved an e-bike to be mindful of this and to acknowledge that the regular cyclists need time to rest and take longer to climb the hills. We thank you for your understanding.
Smart heads stay safe - Helmets are compulsory on our cycling tours!
Helmets are mandatory on our bike tours. It is advised to bring your own, well fitted, helmet with you as our rental helmet numbers are limited (reservation required).
Is this tour suitable for children?
We believe that only children with a good physical condition and previous bicycle tour experience and a minimum age of 12 are able to master the cycle tours with their own strength. Please note that the minimum height for a rental bike is 1.50 m (5ft.).

Single rooms are subject to availability and can be booked for an extra cost of 500 € per week.

Thank you for signing up!

We have already sent you the first e-mail and ask you to confirm your e-mail address via the activation link.